All the hands we have played at the play and learn sessions at The Trout are pre-dealt and therefore randomly generated by computer. That makes it all the more surprising that this week we had two hands which both provided an opportunity for the defence to double a one-level contract for penalties and then defeat it. This is a rare event in bridge.

This was the first hand (reproduced using the excellent Bridge Solver software). 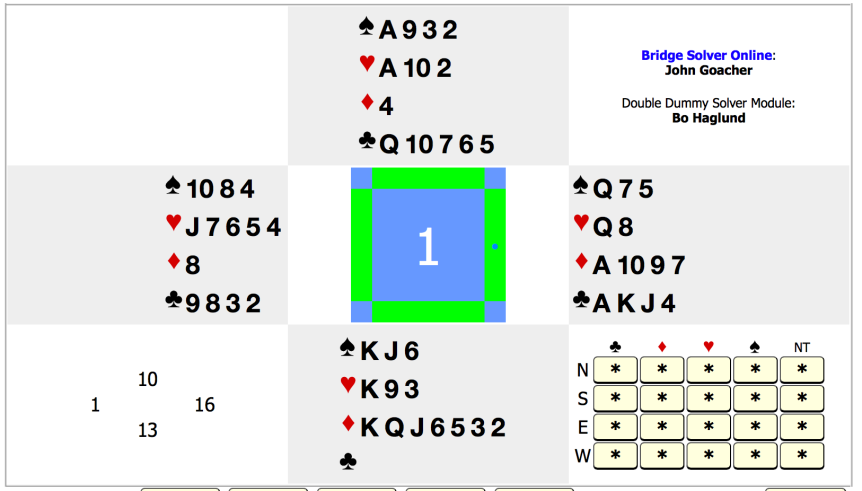 The dealer was East and the normal opening bid here is 1 Diamond (1D), preparing to rebid 1NT/2NT over any positive response from partner, showing a balanced hand of 15-16 High Card Points. This opening bid naturally was a bit of a shock to South, with his seven diamonds headed by a strong sequence. The golden rule to apply when an opponent bids your best suit is simply to suppress your surprise and pass in good tempo, as if nothing unusual was going on.

West also passed and now the onus switches to North.  The North hand just qualifies for a takeout double, which ideally shows support for the other three suits and a shortage in the opening bidder’s suit. (In some cases it may also be the only way to kick off the bidding with a strong hand that has no other obvious bid). In either event it is not a penalty double. As a general rule any low level double when your partner has not made a positive bid (that is, something other than a pass) should be treated as a takeout rather than a penalty double.

But while North expects his partner to respond to the takeout double by bidding a suit, there will be some occasions when he/she is more than happy to convert the double into a penalty double. The way to do that is simply to pass. That should only happen, as in this case, when the partner of the doubler has a particularly long and strong holding in the doubled suit and can be confident of making most of the tricks in trumps.

Beginners in bridge often find this kind of thinking counter-intuitive; “this is our suit” they tend to say “so why aren’t we trying to play the hand instead of the opponents?” The answer to that is that the objective of the game is to score more points than the opponents. It is not just to bid and make contracts. Doubling and defeating an unmakeable contract is often the simplest and most lucrative way to make a good score.

So on this hand East will be lucky to come to more than 2 or 3 tricks if left to play in 1D doubled. If that is what happens the penalty accusing to North/South will be +800 (four down doubled, not vulnerable) or even +1100 (five down doubled, not vulnerable). At the same time the only game contract that North/South can hope to make is 5D – 11 tricks in the opponents’ suit! – which would be worth +400 points. That is only half the reward for roughly twice the effort – an unattractive bargain. The moral is: if there is a big penalty on offer, take it!

Here is the second hand on the same theme that came up shortly afterwards. 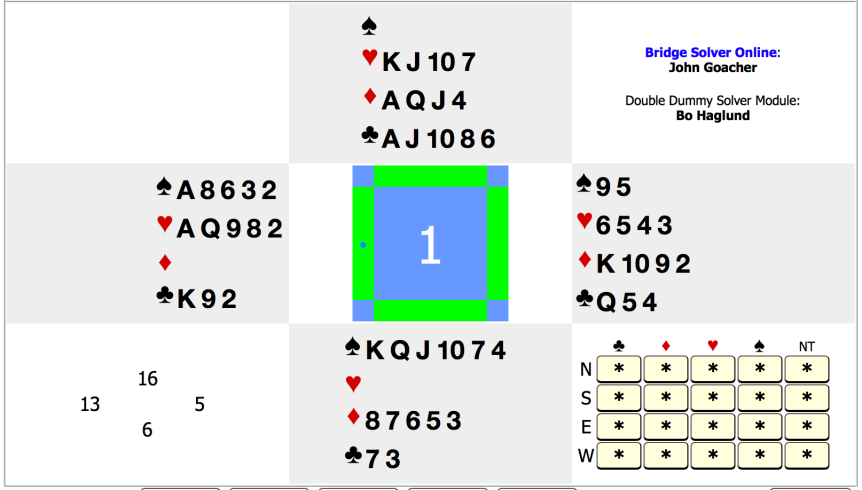 The bidding here, with both sides vulnerable, started with West as dealer. With 5-5 in the major suits, the correct opening bid is 1S, planning to rebid in hearts. North has a perfect takeout double with 16 High Card Points and a void in spades. When this comes round to South, the calculation has to be that defeating 1S is more likely than making game, so a pass is called for. True, North South may well have a fit in diamonds, but game in diamonds is unlikely and the penalty from defeating 1S is likely to be greater than the value of the game, even if it can be made.

Note however that in order to be sure of defeating a One-level contract like this the trumps you hold will need to be at least as good as the six cards headed by a strong sequence shown here. If you only something like KJ953 in the suit that has been doubled, experience shows that the declarer will do much better than you think. One reason is that the A and Q will usually be in declarer’s hand, “sitting over” your King and Jack, thereby reducing the chances of those cards making tricks.

On this hand, with perfect knowledge of where all the opposing cards are located, North South can defeat 1S by three tricks to score +800 (three down, doubled, vulnerable). In practice two down double (+500) is probably a more likely score. Note that there is no game contract that can be made by North South on best defence, although on the day at The Trout North was allowed to make 3 No Trumps at one table.

It is worth noting however that on the second hand, East West will have a much better chance of escaping trouble if they can find their way to play in hearts rather than spades – they can actually make eight tricks with hearts as trumps. How to rescue yourself from a One-level doubled contract will be the subject of a different, later note.

This site uses Akismet to reduce spam. Learn how your comment data is processed.

Are you a beginner?

We offer an eight lesson beginners class at regular intervals – drop me a line and you will be added to the waiting list for the next one.